Discussion on game mechanics, balancing etc.
Forum rules
Posted relevant content can be used under GPL or GFDL (http://www.gnu.org/) for the project. Thanks!
Post Reply
28 posts

What will be the unique properties of this scenario? What challenges will it pose for the players?

I copy from the original Imp1:

Do you think this is balanced? Of course we can weight the provinces in their value, otherwise Sardinia shouldn't have any chance?

Also what were the traditional relations between these nations. Who liked whom?

I guess France and England hated each other. Prussia and Austrian Empire rivaled about the same territory. But otherwise I don't know.
Top

Great Britain and Russian Empire were engaged in 'the great game' for control/influence over Central Asia. This is ofcourse off our map, so don't know if this should be reflected (relation-wise) in this scenario.

Why would Catalonia be independent? Keep Spain together for sake of realism. It would have too much provinces for a minor, so maybe cut a few provinces... or let it be some kind of medium power which has the chance to grow into something bigger. Spain was at the time losing its massive empire, but perhaps it could've been much more if it had managed to keep control?
Top

Uniting Spain is a good idea, since we could make it more difficult for France to expand to the south while opening up the possibility of another minor nation going major. There are enough ways to weaken Spain (low initial industry but strong defensive (and expensive) military) so that it will not become too big. And it would even be more historical because IIRC the times where catalonia was independent were long over in 1814.
Top

Trilarion wrote:Uniting Spain is a good idea, since we could make it more difficult for France to expand to the south while opening up the possibility of another minor nation going major. There are enough ways to weaken Spain (low initial industry but strong defensive (and expensive) military) so that it will not become too big. And it would even be more historical because IIRC the times where catalonia was independent were long over in 1814.

That sounds great, IIRC Spain wasn't that industrialised to begin with, when compared to other European powers. Their country was ravaged after the Napoleonic wars (also a main reason why they lost most of South America during these years). Catalonia was never truly independent, yes the Kingdom of Aragon was, but that was in the late 1400s.

So if Catalonia goes, maybe it can be replaced by Tunisia? So we'll have Algeria and Tunisia instead of 'North Africa'.
Top

By the way, some stuff that happens after 1814:

If you go further still then Norway chooses independence around 1905 from Sweden.

In my opinion it would be great to have revolters or countries go independent. It's what happened in real life after all! But can the game handle it and if so, how? By event or in-game conditions?
Top

Good ideas but some are hard to implement or better should not be implemented in a first version.

Split North Africa in Algeria and Tunisia sounds good. We can just add one or two rows of tiles to the south and extend the map towards Africa a bit. This will result in fights over colonies - hopefully.

I don't want to introduce nationality just now. It is an additional concept that makes everything even more complicated. Surely Norway defected from Sweden because of nationality and not really from geographical or industrial reasons, being so closely situated and well connected. So far I had no idea about splitting Empires. In my view the powers in the world would just eat each other until one and only one is the winner = Imperialism.

Also we do not need to have a very close historical similarity. Especially it should not make the game dependent on these events or unbalance it. As a strategy game, the way the "alternative history" is going should be determined by the actions of the players.

Apart from that we have possibilities to allow splitting of nations:
- A secreat diplomatic mission of other nations (conspiracy)
- Low national cohesion (during a war or when under financial stress)
- Scripted events (playing God - I don't really like it)
- Inbuilt nationality and tendencies to form certain states.

My impression is that it kind of distracts from the strategy part unless it is added as a strategic element. I added it to the ideas list for now, so we will keep coming back to it.
Top

So currently we are working with the imported scenario of the original Imperialism - the first scenario (1820). The industry, diplomacy, military and technology parts will anyway be different, but the geographical (terrain, rivers, provinces, borders, cities, nations) part is the same. For copyright reasons we have to change scenario here and there to make it our own before publishing. I think I squeezed out all useful information from the old scenario files. Now ideally we could use the ingame editor to change the scneario.

The editor is currently not capable of changing much, rather only displaying. But I am working on it. When it's done anyone can improve this scenario.

Here we should discuss these changes. And you can already now post all your ideas, what should be changed in this basic scenario geographical wise (names, sizes, locations of provinces, nations, rivers, terrain, ressources, ...)?
Top

Balancing, experiences from the original

I think we should make it a bit more balanced than it is right now, because otherwise games will happen very, very similarly.
Top

since there is no limit to the amount of countries or provinces I hope to see more of a historical start. 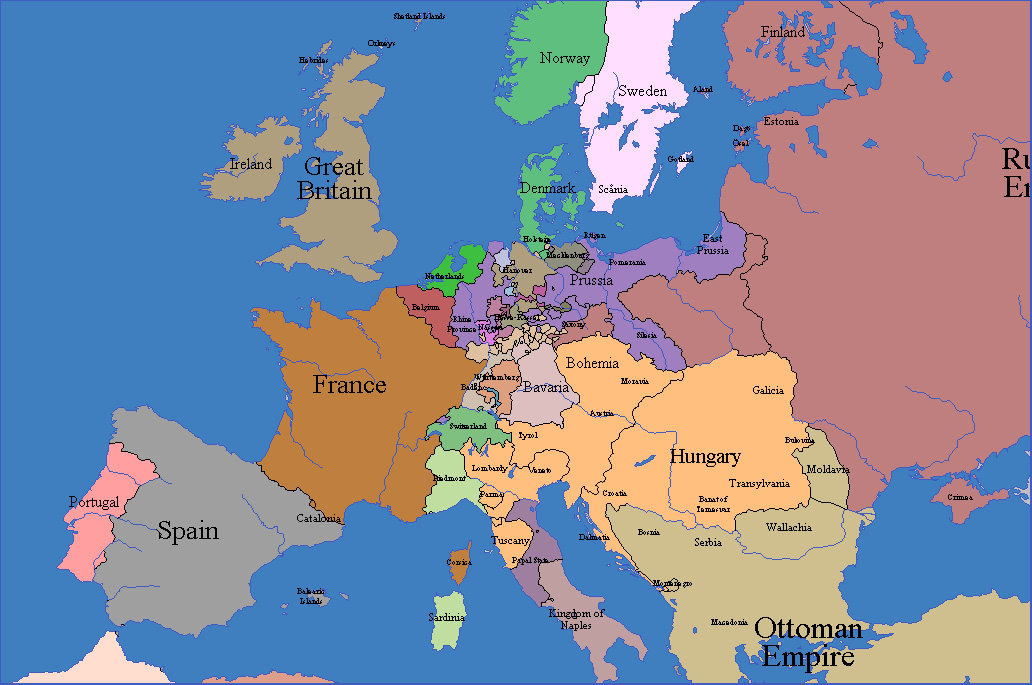 In each scenario: we must choose either historical accurateness or balanced game play, but cannot have both on the same level. Most of the small kingdoms in the middle of the map would be irrelevant in a strategy game and the diplomatic interactions in real life (like marriages or so...) are quite complicated to model. I think a good strategy game needs to be balanced, otherwise there is a dominant strategy and the replayability is not so much fun.

I prefer to have a good strategy game than a historical simulation but others may see it differently. So Europa Universalis or Hearts of Iron is like a deterrent example for me. I try to align myself to approaches like Civilization or Master of Orion and use the historical setting mostly for immersion and explanation of the specific game elements.

So the first scenario should contain balanced major powers. However now that I think of it, fans of historical accurateness could have their own scenario. So we could offer two versions for each time and location that we want to cover. A historical and a balanced version. Depending on the interest in the community we will have many different scenarios.